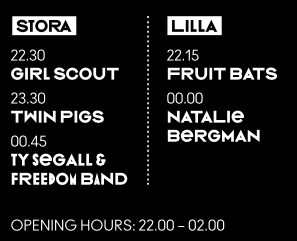 It’s a tale as old as time: four young people meet while studying. In this tale our protagonists are Swedish and became acquainted at the Royal College of Music in Stockholm not too long ago. They initially bonded over a shared love of acts like Big Thief, Phoebe Bridgers, Elliot Smith and the Beatles which formed the starting point of their sound. And there you have it: Girl Scout. Emma Jansson, Evelina Arvidsson Eklind, Per Lindberg and Viktor Spasov didn’t mean to become so cool, it was an accident. The only real way that cool things happen.

Twin Pigs was formed in 2015 blah blah blah. Who really cares? The most important and perhaps the only thing you need to know about Twin Pigs is that you won’t be disappointed. You want mayhem, insane tunes, and full-blown mental illness. You want to feel surprised and hungry for life again. Then Twin Pigs is exactly what you’re looking for and has the answer to your desires.

Ty Segall is a true trailblazer for the revival of psych-influenced garage rock. This restless, multi-instrumental, creative talent has since the late 2000s produced a catalogue as diverse as it is consistent – thirteen studio albums as well as several EPs and singles. Always raw, always true, always moving, never boring, Ty Segall is tireless in his pursuit of the spirit of rock’n’roll. His latest adventure is documented on his new album ‘Harmonizer’ (2021), where we find him experimenting with synthesizers and thus creating another chapter in the ever-evolving story of Ty Segall. Next summer we will be able to experience the untamed passion of this legend when he plays Way Out West 2022.

As one of the forerunners of the indie folk-boom in the early 2000s, Fruit Bats quickly gained a reputation for their stunning melodic sensibility and their compelling mix of classical songwriting and alternative country. Today, 20 years later, the band’s constant Eric D. Johnson is as relevant as ever – a feat not easily achieved.  In 2021, Fruit Bats released their celebrated eight studio album ‘Pet Parade’ where we find Johnson collaborating with his Bonny Light Horseman buddy Josh Kaufman and the result is, as always, vibrantly cinematic – each song the best indie film you never seen.

Among the many forms that gospel music can take, contemporary indie rock may not be the most common one. But with her stunning debut album ‘Mercy’ (2021), Natalie Bergman shows the potency of this unlikely pairing. The deeply spiritual record absolutely vibrates with redemptive power when Bergman calls for God to lift her up from the the sadness. Recorded at her brother’s home studio, with whom she also has the duo Wild Belle, Natalie Bergman has created an album that is original, cathartic and most of all comforting.