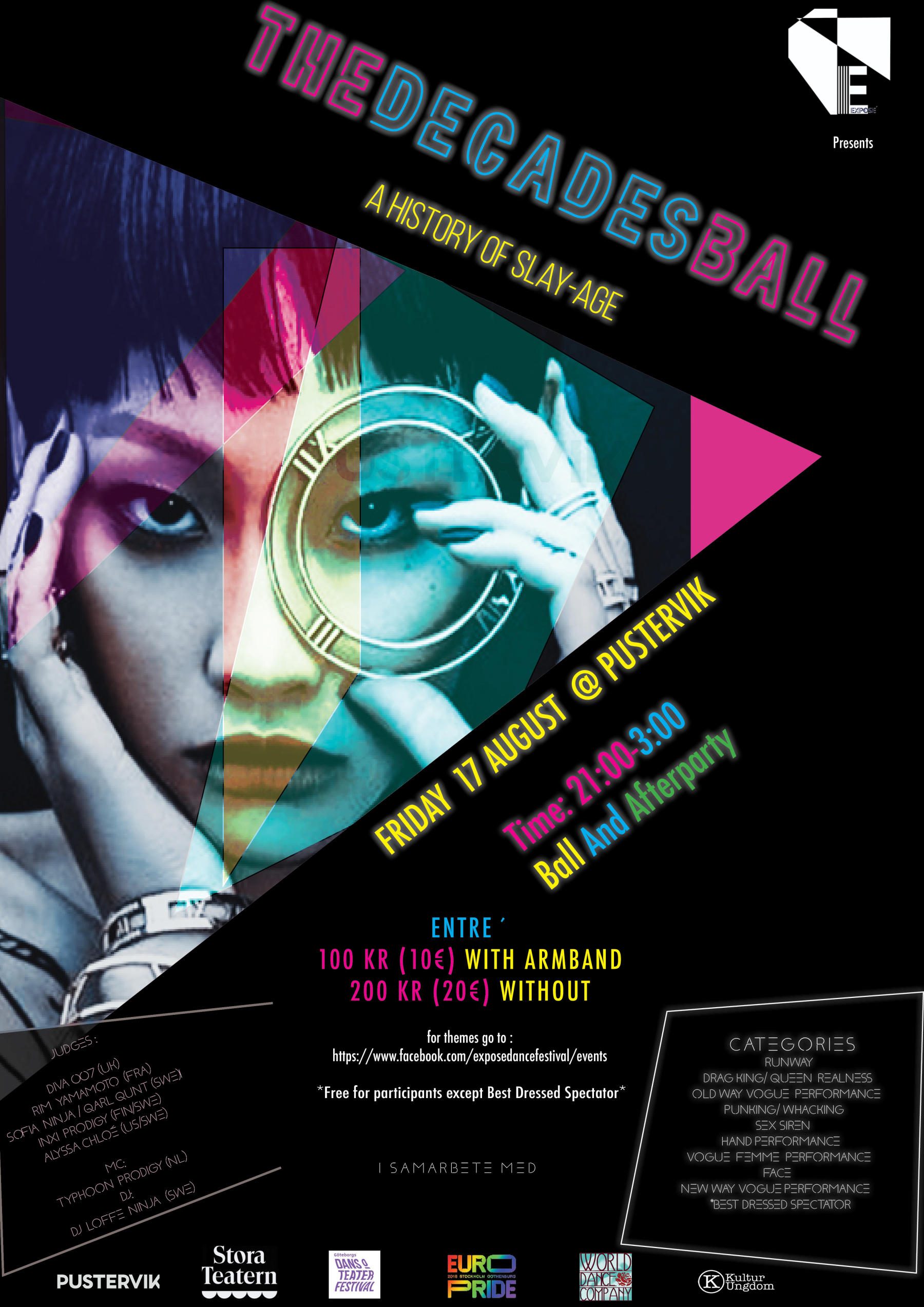 The Decades Ball: A History of Slay-Age

A true celebration of Timelessness

Join us as we celebrate EuroPride 2018 and take a journey to revisit some of the most pivotal and iconic moments that slayed the decade and we are still gagging over.

All Categories are OTA

And here are the Categories :

The era of the 1920’s where skirts were raised , Jazz was played , the charleston was in… and opulence was the standard . No one best captured the height of this era than the Russian French Artist and Fashion Designer ERTE´, The Father of Art Deco . Inspired by his relationship with Prince Nicolas Ouroussoff who encouraged him go against the trends Erte´s elegant , sophisticated , flamboyant designs not only captured the Art Deco period but an expression of his love for the Prince. His designs and art was embraced and set the standard of fashion from Paris to Hollywood. From Theatre, to Ballet, to Vegas and Drag Queens, Erte´s slayage continues to remain timeless .

For this category Bring it to the runway in your own Erte’ inspired creation …..Remember keep it fashion …not costume ….

Theme : Victor/Victoria
"The most celebrated drag performer in History "

The German 1930’s story of the most “celebrated Drag performer in history “ Set in Paris, Victor/Victoria tells the story of the starving singer Victoria and her gay best friend Toddy who come up with the idea to reinvent her as Count Victor Grazinzki a gay Polish female impersonator and slayed the Paris nightclubs. Recreated into the brilliant film and musical of the same name starring Julie Andrews, this story was ahead of its time in challenging gender roles/identity and homosexuality .

For this category , bring us a memorable performance as both Victor and Victoria and prepare to Lip Sync for the trophy and Prize …

Theme :
Rosie The Riveter/ Soldier of Love
“We Can Do it /Pink Triangle “

The 1940’s grippled with WWII, to fight the evil measures of the holocaust and persecution of humanity . The Pink Triangle and Rosie the Riverter became cultural symbols of this time . The Pink Triangle was used by Nazi’s to identify gay prisoners who were sent to prison because of their homosexuality and is used today as a reminder of the victims that were persecuted in this dark period. Meanwhile as males were called to duty in the military, Rosie the Riverter's We Can Do it slogan became a cultural icon for womens empowerment , as women slayed the workforce and took on the responsibilities in jobs that what was at the time considered “male roles/jobs”

For this category , Bring that classic "Pop Dip and Spin" to the runway as Rosie the Riverter or A Soldier of Love …

In the 1950’s Rock n Roll became the sound and the craze of youth and took the world by storm … Little Richard, Chuck Berry, Jerry Lee Lewis, Buddy Holly ,Elvis and more was blaring on the radio, while blue jeans, leather jackets, greasers, poodle skirts, saddlelock shoes , were all the rage and movies such as Rebel Without a Cause crystallized the attitude and rebellion of this era on film …

For this category, come and "Punk" this decade with Rockabilly flair and attitude ….

Helmut Newton , the iconic photographer for French Vogue and Harpers Bizarre and considered the “King of Kink” , is one of the most influential and imitated photographers of all time . His provocative , erotically charged black and white portraits not only was a mainstay in Vogue , but influence modern fashion photography. His portraits of women as amazonian , and empowered of their sexuality helped captured the spirit of the 60’s sexual revolution .

'For 18 and older'
Take one of Newton’s classic images …then recreate it for the runway….be creative and imaginative …and own it ..bring a photo of the image for the judges …

This 1970’s remake of the Wizard of Oz starring Diana Ross and Michael Jackson reinvented and updated this classic to reflect the wild flamboyance, opulence, and trendiness of the 70’s . Nothing best captured this then the classic scene “Emerald City , Green Red , Gold “ as the inhabitants of OZ are a slave to quickly changing colors and trends of the times mastered by the Wiz himself

Give the hand performance of life in OZ with incorporating the ever changing colors and theme of Green, Red, and Gold within your performance ….dont forget your gloves

New York City 1980’s street culture set the world by storm, from Hip Hop , to underground nightlife culture and graffiti street art and artists such as Jean Michel Basquiat. But it was the late great artist, Keith Haring’s iconic chalk pop /Graffiti artwork that decorated subways, blank advertisement boards as well as collaborations with Grace Jones , Vivienne Westwood, Malcolm McLaren, and Madonna that engraved his signature style . His artwork often reflected social political themes ranging from homosexuality, anti-apartheid , the crack epidemic, and AIDS. His untimely passing in 1990 shook the artworld, but brought attention to fight against AIDS and his life continues to be symbolic of AIDS awareness….

Pick your favorite decade and come dressed in your most fabulous creative attire as you come to spectate this event. Catch the judges eye and imagination to win a special prize.

The decade that was declared the era of the Supermodel, thanks to the iconic British Vogue cover featuring Naomi Campbell, Cindy Crawford, Christy Turlington, Linda Evangelista, and Tatjana Patitz by photographer Peter Lindbergh. The image of the supermodel dominated the media so much so , Rupaul burst onto the mainstream singing about it and The late great icon , George Michael immortalized them in his epic “ Freedom 90” video as they lip synced his words, and slayed the runways and magazines worldwide.

Show us your natural beauty and features with simple t shirt , jeans, and a clean face with minimum to no makeup and a supermodel attitude

2000’s and Beyond
Category is : New Way Vogue Performance

The future of the world is in our hands , literally . We are in the midst of a cyber war as The …androids, cyberbots , social media , microscopic chips, take over our lives and slowly replacing how humans connect, behave, and interact. As technology dominates and colors our future, the future of humanity could easily become bionic….

For the our last category, We want you to bring the NEW WAY into the Future as the epitome of artificial intelligence and the embodiment of all that is bionic in fashion and vogue ….

Presented in collaboration with :