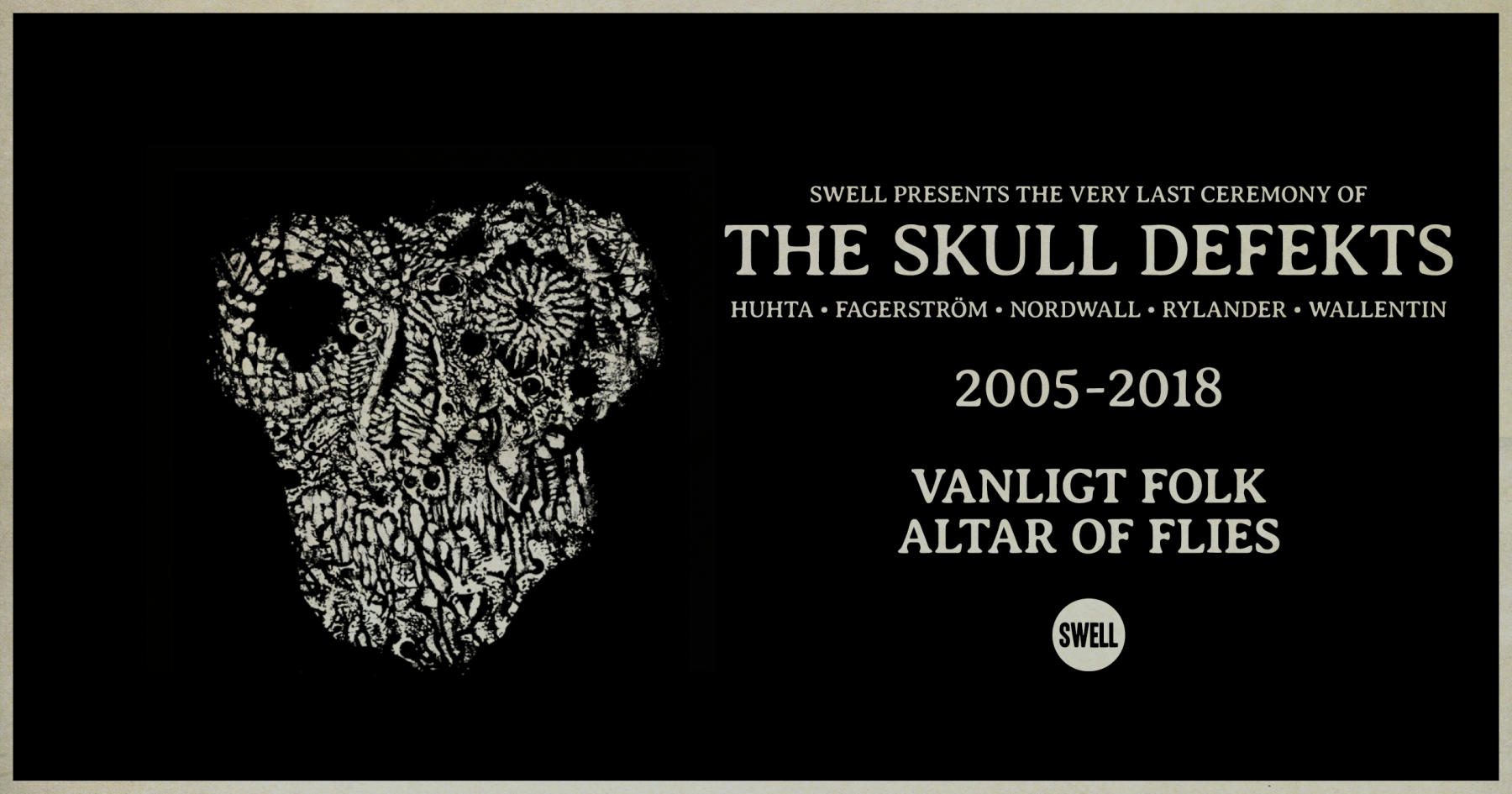 “In January 2005, I had just finished a couple of weeks’ worth of shows in the UK playing guitar with a band called Kid Commando. We had released one album and a few 7”s in our six year lifetime and toured like mad. We were a live band and consisted of three very different personas, it’s a wonder we only got into one fist fight during our time together.

When Kid Commando went off the grid, I had already started talking to local drum hero Henrik Rylander of Union Carbide Productions about playing together. I had seen him play his intense feedback stuff solo and knew he was into weird, challenging shit. So – we quickly formed a band called The Skull Defekts with some important friends and played our first show opening for Sunn O))) in Gothenburg in March 2005. The aim was to make circular, ritualistic, monotonous rock music and to record and release as much stuff as we possibly could.

It took us about three years to find the final formula with our old friend Jean-Louis Huhta taking percussion and electronic responsibilities and Daniel Fagge Fagerström on vocals and guitar among other things. Huhta had been in Anticimex and had a great denim suit so he was an easy choice. Fagge had spent his 90ies in the most violent hardcore band I ever knew, called 8 Days of Nothing, so he had a natural place too.

We did some special and one off projects with friends as The Skull Defekts, and me and Rylander recorded and played shows as a duo, doing deep drone electronics. It was confusing to some, not to us though. Same energies, same band. We had a something that felt timeless and monolithic.

The Skull Defekts did a few albums, a bunch of singles and tapes and toured Europe, China and finally the US in 2008 where we met up with Daniel Higgs in Baltimore. I had met him at All Tomorrow’s Parties a few years back and Fagge once swapped shoes with him in Spain. He joined us on stage the next night at The Black Cat in Washington DC. Higgs was a member of the band before any of us even knew it. It felt so natural to play together that we decided that the five of us should make the next Skull Defekts album. In the end of October 2009, Higgs came to Stockholm and there we recorded Peer Amid in three days. The US tour that followed was the absolute highlight of The Skull Defekts. No bullshit. It was truly magic. Zomes opened for us on all dates. We all became friends and recorded the 2013-3012 12” together at Machines With Magnets in Pawtucket, RI on a day off. We felt like we were forever.

The Skull Defekts were a machine. Our five-man strong army created transcending rock music. At times our music made time stop for me, and I had deeply life changing situations playing our music. Music I had only dreamt about making. We were a band I would have loved to be a fan of. But things do change. Higgs was focused on his solo works and lived a nomadic life across the atlantic. We recorded the Dances In Dreams Of The Known Unknown album together, with Higgs less involved. A great album I think. We succeeded to say what we wanted to say with it. Then, a few shows in Europe and the US, and after that the strange place where we have been ever since.

2016 we started working on a new album. Huhta was not involved at all. Higgs was gone. Energies had definitely changed. I could not see a future for us so I decided to leave the band the day we went into the studio to record. Still there were one more chapter of The Skull Defekts to be written. An important one.

Our new album, simply entitled The Skull Defekts, marks the death of the band and an important farewell to those who have cared. It holds many echoes of our history but it is music that is present and now, and it’s hopeful in its own darkness. It carries some kind of positive desperation knowing what we knew while recording it. We worked with Mariam Wallentin as our fourth member on this one, and she brought in something new; new creativity, new blood. Her contributions were important.

The stuff I wrote for it was of course colored by the fact that we were not comfortable as a band. I think Fagge’s stuff was too. And there in the studio, we realized how much we love creating together. We love playing together but it just had to stop. The Skull Defekts might be our strongest album musically. It is the album that might be the most composed one. It is well prepared musically and of course holds improvisational parts, but probably less than before.

This is our last album. The Skull Defekts has been an important part of our lives. It is no longer. We want to thank all labels we have worked with (especially Thrill Jockey Records who have been extremely supportive during the years), Regina our booking agent, promotors, past members and collaborators and thanks everyone who came to our shows and understood or didn’t understand our music. We do love you.”